ReinventLaw London: One does not simply start a new law

ReinventLaw London was well attended as ever and the list of attendees and presenters from all over the world demonstrated how the ReinventLaw concept has matured. I have attended all three London events.

Last Friday’s event represented an opportunity to catch up with numerous contacts and friends across the legal and legal IT world, many of whom had travelled to London to be there.

These included lawyers, academics, legal IT professionals – vendors, law firm CIOs – knowledge management professionals, corporate counsel and fellow commentators on the profession. It was great to meet in person many of my friends from social media, particularly from Twitter. I actually knew so many people that the list is too long to mention here!

This year’s event was hosted by the University of Westminster Law School in partnership with Michigan State University College of Law. It was powered by LexisNexis who provided apposite refreshment – delicious cakes with ‘legal jargon’ iced onto them – so that we were literally cutting through legal jargon – and fortune cookies – a nod to the ubiquitous theme of predicting the future of law. They also hosted the post-event drinks.

ReinventLaw was ably introduced by Renee Newman Knake of Michigan State University College of Law and  John Flood of the University of Westminster who I met on Twitter and had seen a few days before at the wonderful Scottish Ensemble Seavaigers concert with Brian Inkster, who I feel has played a genuine part in reinventing the law firm.

ReInventLaw was the brainchild of Professor Daniel Katz and Renee Newman Knake with the idea of getting the legal industry to think a bit differently. And it has continued to deliver new thinking and ideas. Katz was one of the first to introduce technology, particularly data analytics into legal education, so the event has always had a strong technology focus and big data featured prominently this year.

This was the third London event and while the concept has retained its original aims, the delivery has become a lot slicker. The upside of that is that it attracted an impressive selection of presenters and attendees from all over the world; and the venue and delivery were excellent. The structure is also slightly different from most legal and legal IT events: it is free to attend – but you do have to register in advance as it is always oversubscribed. It starts at 12:30pm and goes through until 5pm, and although there are regular networking breaks, there is no lunch break, so you might want to have an early lunch beforehand – especially if you have to travel to London. The presentations are short – six-minute ‘ignite’ talks and 12-minute presentations – so in theory, they need to be dynamic and to the point. In the ReInventLaw tradition, they should also be a bit different with the past couple of years including beat poetry and interpretive dance! There was none of that this time, though there were some excellent ideas. 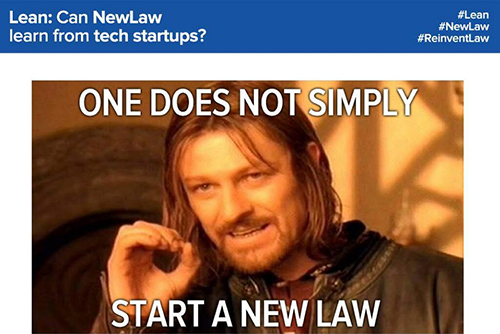 I cannot cover them all in a short review so I will pick out some themes and presentations that I found particularly resonant.  For a comprehensive report, it is worth taking a look at the review by David Gilroy of Conscious Solutions which includes a detailed mindmap of each presentation.

There were some moments of genius, and one was the slide that Ivan Rasic of LegalTrek kindly allowed me to use to accompany this piece. You can’t just invent a new law, he says and he is right about that – but you can invent new ways of delivering legal services and legal education.

Some presentations suggested novel ways of delivering legal services – Kanan Dhru on Lawtoons to educate and engage schoolchildren in India, Brian Inkster on pop-up law in Scotland, Siobhan Duncan in a standout presentation on pre-paid cards in legal services.

Inspiration from other sectors and applying business management theory and practice and new technology to drive innovation was a recurring theme: standout presentations included John Sheridan of the National Archives on big data for law; Graham Digby of LexisNexis on predicting litigation outcomes; Mauritz Barendrcht of HiiL comparing legal services delivery with healthcare delivery; Marten Janson of Fondia in Finland on legal departments as a service; Ivan Rasic of LegalTrek on what NewLaw can learn from tech startups; Frédéric Pelouze and Alexandra Uhel of Alter Litigation on The Paris Bar Incubator – if you’re not pissing someone off, you are not innovating. So true.

Another theme was novel ways to engage clients. Dana Denis-Smith of Obelisk gave a particular striking presentation, ‘What’s Love got to do with it?’ which compared online legal services with online dating! It’s not just the brain which matters in law; it’s the relationship, she said. Brian Inkster’s enigmatically titled presentation ‘Improving’ was essentially about applying creativity to law. I met Brian Inkster on twitter and I have visited Inksters über-cool offices in Glasgow. One of his slides was the photo I sent them of me wearing one of the famous Inksters Christmas hats at the Ice Hotel in Sweden! I was particularly impressed by the ‘pop-up’ law concept.

Some of the topics were fun, while others raised serious issues. Kimberley Lott on ethics in forensic science was about using technology as an attempt to avoid miscarriages of justice. Joshua Lenon from Clio highlighted the on-going issues created by the lack of global standards for managing information in the legal profession. Joshua and I follow each other on twitter and it was great to meet in person!

In terms of commentary on the legal marketplace, Reena Sengupta of RSG Consulting, who organises the FT Innovative Lawyer Awards standout talk on Big Law Reimagined had everyone nodding in agreement. She suggested that Big Law should learn from tech companies like Apple, not to reinvent new products, but in terms of product development that enforces customer loyalty. However they should also recognise that they can never become a global brand in the same way. Janvi Patel of Halebury highlighted the need for more flexibility in the legal business model – and among lawyers.

The downside of ReInvent Law’s popularity and high profile – it was trending on Twitter, notwithstanding the World Cup – is that it has started to attract presentations that focus on an issue in order to flag up a business offering. I should state here that I am certainly not criticising vendor presentations as technology and software developments surely drive and enable innovation and change. However, there were a couple of PowerPoints that made their allocated 12 minutes seem to last forever. But they didn’t get away with it. The audience responded rather harshly via Twitter. “Would it be rude to shout NEXT at this point of #ReinventLaw?” said one tweet and the Twitterati sniggered. That’s the magic of ReInvent Law. It brings us all back to university. For one afternoon, we became students again, learning and laughing. And that has to be a good thing. I’m looking forward to the next one.