Workshare and Raspberry Pi: investing in the future

Last Wednesday saw the closing awards ceremony for the Workshare Raspberry Pi volunteer project. For the past five weeks, Workshare has been working with Tower Hamlets Integrated Youth and Community Services to teach young people from the local community how to code using credit card sized computer Raspberry Pi. The course culminated in a competition whereby the top three applications won a paid summer internship with Workshare. All the young people who completed the course were also invited for at least a day's work experience.

The warm-up act was amazing young magician Henri White, who did some clever card tricks, a bit of escapology and, memorably, swallowed a long blue balloon in the style of a sword swallower - unlike a sword-swallower, he actually ate the entire balloon, but I digress… he was brilliant.

We then had an introduction by Workshare's Holly Mills and Charlotte Hinson. Charlotte, a customer success coordinator at Workshare, developed the initiative, which was driven by the fact that one in five jobs in the UK is unfilled because of skills shortages, particularly in technology. The idea was to support the local community in a way that leveraged Workshare's expertise and diversity.

Although Raspberry Pi is small and affordable, the challenge was to inspire young people to get involved in coding and programming and consider a career in technology. The project also inspired Workshare's staff. As Holly put it, they got to see their colleagues in a different light when they watched them explaining and demonstrating their technical expertise. “There have been some heroes,” added Barrie Hadfield, Workshare's founder and CTO. “The non-technical staff involved in the project showed that you don't have to code to have a career in technology and the course revealed that the concepts behind programming were alien to many of its teenage participants.”

The introduction and entertainment was followed by presentations of some of the projects and a demonstration and judging session where everyone could see the apps that had been produced. These included technology in the home, including apps to open curtains automatically, a motion sensor CCTV camera, revision timetables and complex games. 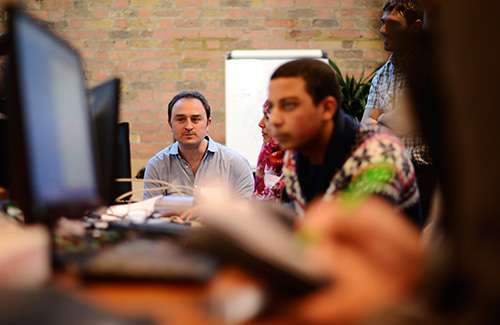 I was honoured to be asked to help Barrie and applied futurist and TV tech commentator Tom Cheesewright judge the competition and decide the winners. Although the three of us approached the apps from very different perspectives, we agreed unanimously.

In no particular order the winners were Khaledur Rahman for  'Why we fight', an adventure game where the playercould decide the direction and outcome of the story, and which would eventually include heartbeat and flatline sounds to indicate the player's life and death; Tanzla Akhter for her carefully structured and coded online revision game - a multiple-choice general knowledge test with a real-time marking scheme and Shahidul Islam  for a multi-game device which included tic-tac-toe, general knowledge and guess the number. 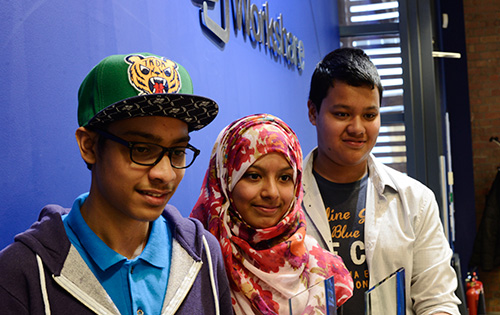 While the judges were deliberating, pizzas and drinks were served and Henri kept everyone entertained. Finally there was an awards ceremony, a lot of photographs were taken and the Workshare team, the judges and a few participants decamped to a cool little bar just up the road from Workshare's London offices.

It was a privilege to be part of this excellent initiative that brought together Workshare and its local community and gave young people a positive introduction to coding, programming and working in a technology company with a positive and inclusive culture. The Raspberry Pi scheme brought out a lot of different talents and I am certain that many of the young people I met will go on to have successful careers in technology.