Cloud vs. Appliance: Comparing the Total Cost for E-Discovery

For legal technology professionals involved in e-discovery, an ongoing challenge is to balance performance against cost. This is particularly true when selecting a review platform, because review is usually the most expensive, time-consuming and critical stage of the e-discovery process. Whether you work at a law firm or in-house at a corporation, you want a platform able to meet the demands of the case but that will not break the bank.

With the increasing popularity of cloud computing, the answer to that challenge often turns on whether an e-discovery platform delivered via the cloud-also known as Software as a Service-is right for you or whether a locally hosted, appliance-based platform better suits your needs.

It is beyond dispute that the cloud offers many advantages over an appliance. In June 2012, the National Institute of Standards and Technology issued its final recommendations on cloud computing. “Compared with traditional computing and software distribution solutions, SaaS clouds provide scalability and also shift significant burdens from consumers to providers, resulting in a number of opportunities for greater efficiency and, in some cases, performance,” NIST concluded.

Still, some legal technology professionals harbor the belief that bringing e-discovery in-house is the more economical option. To find out if this is so, we undertook an analysis of the total cost of ownership (TCO) of cloud-based versus appliance-based e-discovery platforms. In order to accurately evaluate the true cost of each, we broke down all expenses required to support an application, including infrastructure, technology, staff and ongoing operational expenses.

Taking all costs into account, and using our most conservative numbers, the cloud proved cheaper by a long shot. As we explain in more detail below, the cloud resulted in cost savings of 36 percent over the appliance.

For our analysis, we designed a hypothetical, but typical, e-discovery client and analyzed its total costs over a three-year span, using either a cloud or an in-house e-discovery platform. Our hypothetical client was a large law firm managing a mix of 200 small cases of 25 GB each and 25 large cases of 200 GB each, for a total of 10 TB of data. Because it is rare for all data in a case to arrive at once, we spread it over the three years, for 3,333 GB per year.

Another assumption we made was that the data would be culled at a rate of 67 percent, the average rate reported by a recent industry survey. After culling, the annual quantity of data was reduced to 1,100 GB. We further assumed a maximum of 500 users on the system.

In building our TCO hypothetical, we wanted to ensure that the expenses were accurate and realistic. Towards this end, we:

Notably, even though server downtime is a real risk, our analysis excluded business impact due to downtime because it varies so widely among companies. If downtime costs had been included, then the cost-effectiveness of an on-demand, cloud-based service would be even more dramatic.

The NIST report concluded a key advantage of the cloud is the ability to get started with no upfront costs for equipment acquisition and installation. This is because the cloud provider hosts and maintains the application. The following table illustrates this:

Other one-time fees include site setup, processing and productions. The following table shows our estimates of typical fees:

There would be no processing fees for the in-house platform because the equipment costs and software licensing are accounted for in other expense categories.

Although both cloud and in-house applications involve recurring fees, the fees differ widely in nature, as the following chart shows: 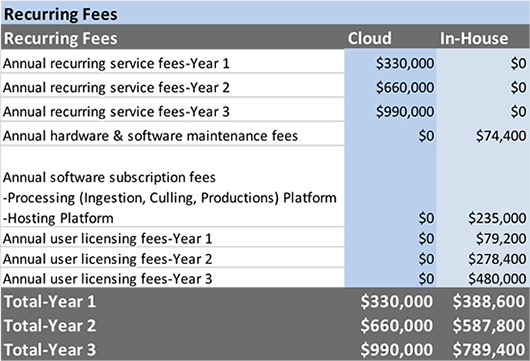 The in-house appliance would incur annual recurring fees relating to hardware maintenance and software subscriptions associated with the processing and hosting platforms.

For the cloud-based application, there are no maintenance or licensing fees. There would be a recurring monthly hosting fee, charged by the GB. Assuming a cull rate of 67 percent, then the data being hosted is 1,100 GB the first year, 2,200 GB the second year and 3,300 the third year.

Just as the cloud platform required no up-front costs, it also requires no ongoing operational expenses. The same cannot be said for the in-house platform, as this chart illustrates: 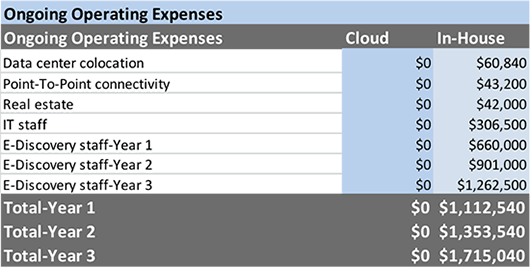 The ongoing operational expenses required to support the in-house platform include:

To set the salaries for e-discovery staff, we used the average salaries identified by The Cowen Group in its 2011 salary survey of law firm litigation support staff. For IT salaries, we used data from CBSalary.com.

Adding Up the Total Cost 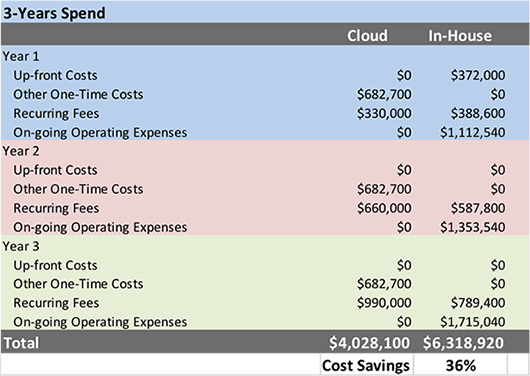 Thirty-six percent cost savings using the cloud over an in-house appliance is clearly dramatic. A further advantage of the cloud, not shown by these numbers, is that it provides flexibility to quickly ramp-up when activity increases and terminate costs when the project is finished.

With an in-house platform, operating expenses continue, regardless of the level of activity, and there is constant worry about the investment becoming an idle money pit.

John Tredennick, Esq., is the founder and CEO of Catalyst Repository Systems, an international provider of multi-lingual document repositories and technology for electronic discovery and complex litigation. Formerly a nationally known trial lawyer, he was editor-in-chief of the best-selling book, “Winning with Computers: Trial Practice in the Twenty-First Century.” Recently, he was named to the Fastcase 50 as one of the legal profession's “smartest, most courageous innovators.”
Tweet