SOLID East in NYC, an event produced by the Cowen Group, was a dynamic, interesting and highly enjoyable conference about legal innovation.  SOLID, which stands for Summit on Legal Innovation and Disruption, featured a slate of well-known speakers ranging from lawyers to legal ops professionals, vendors and data scientists.

David Cowen, CEO of The Cowen Group, kicked off the event by parsing the difference between transformation and innovation.  The legal market has changed, and the rate of change has been very fast.  Cowen said the hierarchical model is being replaced by the asymmetrical world we live in now.  The asymmetrical model decentralizes leadership and provides more autonomy and independence than the hierarchical approach which gave power only to the top.  Cowen’s resounding question - “how do you move from now to next?” - was thought-provoking.

The SOLID format was an engaging mixture which provided a lot of substance while still being interactive and digestible.  The initial session #1 covered The Big Picture – Macro Drivers of Change.  Then sessions #2-4 focused on Innovation in Action, from corporate use cases, and both process and people driven innovations respectively.  In each session, several short TED-style talks were delivered by subject matter experts sharing their perspectives and experiences of legal innovation and disruption.  Other speakers conversed with David Cowen in a fireside chat Q&A setting where they shared recommendations and war stories.

After each session’s batch of presentations and chats, attendees actively participated in table talks so they could discuss the speaker sessions in small groups.  After each table talk, a Town Hall meeting format provided attendees the chance to offer impressions and lessons learned from what they had heard.  The kinetic energy at SOLID was palpable and the day moved along briskly with a tour-de-force pace.

People who attended SOLID came to learn, to teach, and to tell the truth, even if the reality was that they had failed at first.  Several speakers candidly admitted that their projects didn’t always succeed.  Others said they sometimes had to go rogue and try new things without following their employers’ stated procedure, permissions or protocol.

Many experienced failures -sometimes painful and costly – and they had to recover and carry on.  Even with such setbacks, the ultimate message was to take calculated risks to continuously drive yourself and your employer forward toward innovation.  One of the speakers from a huge company said that “productive failure” was a key ingredient of innovation, and to learn from it.  She noted that hundreds of billions of dollars are wasted on innovation projects that fail.

Jamie Berry of Integreon, a large global ALSP (alternative legal services provider) shared details for a client project which transformed processing of third-party subpoena requests from a cost center to cost-neutral, and eventually a profit center.  Rather than immediately turning to technology tools, Berry’s team started with process engineering.  Examining the process using Six Sigma philosophy revealed efficiencies and roadblocks.  Some of the simplest changes saved time and money which added up tremendously. 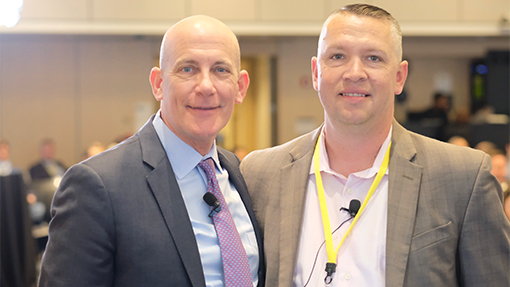 Berry noted that technology is important but if possible, tweak the technology the client already has rather than building or buying something new.  Also, he said that investing in change management and training is key to the success of any legal innovation.

Change management was one of the most frequently invoked phrases at SOLID.  One speaker’s call-to-action said there is no way to do more with less, but there is more to be done, and we must do it differently. When people are empowered to do things differently, change can happen.

Change cannot always be done in the daylight.  Ryan Costello of ProSearch lives in Rome and his presentation revealed one of the ancient city’s secrets.  A group of “clandestine do-gooders” called G.A.P. trolls the streets of Rome at night, filling potholes, fixing broken buses so they don’t spontaneously combust, and more.  Sometimes G.A.P. must ignores the governmental bureaucracy which prevents these improvements from being made in the light of day.  Costello referred to the G.A.P. acts as “constructive sabotage” and “permissionless improvements”.  At times, G.A.P. chooses to ask for forgiveness rather than permission.

Tying his talk into SOLID’s legal innovation/disruption theme, Costello called the G.A.P. approach “asymmetrical problem solving” that can resemble constructive sabotage.  By embracing risks and relying on problem solving, legal professionals can take a page from G.A.P.’s book on how to get things done, even if achieving goals entails stealth tactics and bending the rules.

Data and metrics were touted as important allies for legal innovators.  Tommy Shen, a data analytics expert for Bloomberg Law, humorously proclaimed himself a “data therapist” since his role is often to listen to his audience, find out what they want, and try to deliver it to them.  Shen cautioned, however that the data is only as good as the people who develop it.

Another speaker recommended to strive toward making better decisions by using greater data, but he also encouraged people to distill metrics down to a manageable number, think 10-15 and not 200+.  Too much data, or simply bad data, can do more harm than good.

Co-creation was another SOLID theme, and examples abounded where law firms and legal departments had collaborated with outside consulting firms and vendors to create useful workflow solutions and technology together.  One corporation used a Proof of Concept model, developing a solution in tandem with their technology provider, and no money changed hands.  The net message is…create symbiotic vendor relationships and everyone is a winner.  If the project fails, you have hopefully learned something.

Another speaker emphasized the upside win-win of co-creating solutions with a startup company.  The vendor gets innovation based on a real-life problem to solve, and a big-name client to establish its credibility in the market. The client gets a solution that fits them like a glove.

In a single day, SOLID delivered power and a positive message that change is happening and those of us attending are part of the solution.  Rather than spouting a litany of cautionary tales and fear tactics, SOLID’s speakers and audience members spoke openly about their desire and attempts for innovation.  They related their sparkling successes but also honestly admitted that some projects which fell short.

The unvarnished truth is that not everything succeeds, but that perseverance is important.  Failure is not shiny, but it’s real.  Failure can attract more attention to the problem, which can ultimately lead to a solution.

One SOLID speaker said her colleagues had called her a “tall nail” meaning that she was sticking out inconveniently and should be hammered down to be level with the floor (and to not threaten the status quo).  Instead, she challenged her colleagues to raise the floor rather than hammering her down.  The capability to stand our own ground and raise others to a higher level was one of many great takeaways from SOLID East.

Christy Burke is President of Burke & Company, a public relations, marketing and business consulting firm that serves innovative legal tech companies, law firms and law schools.  Email her at This email address is being protected from spambots. You need JavaScript enabled to view it. , follow her @ChristyBurkePR or connect with her on LinkedIn.
Tweet