As Legal Geek founder Jimmy Vestbirk took the stage for the first-ever Legal Geek North America conference, it was clear that this was not going to be like any other legal conference – his description of “quick, short and sharp” as the Legal Geek style was certainly accurate.  Vestbirk greeted everyone warmly and outlined the Legal Geek Ethos which prioritizes friendship over selling, recommends both learning and teaching, reminds of the importance of pitching in to help, and reminds about the all-important “no ties” policy, which was strictly observed – no ties in sight!

Vestbirk compared the conference to Woodstock, the legendary American music festival of 1969 - a great analogy because the event’s clear aim was to bring a diverse group of people together for a memorable, singular experience that could never be recreated.  Attendees hailed from all over North America including the U.S., Canada, Mexico, and other countries too. Much like at Woodstock, those presenting on the stage were standouts, but their talks resonated with similar themes to create an overall fabric of fresh ideas, positivity and practical analysis. 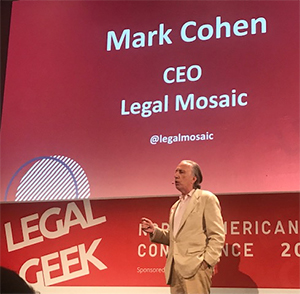 Legal industry legend Marc Cohen of Legal Mosaic was the first speaker after Vestbirk’s introduction, which was perfectly framed because Cohen did attend the original Woodstock.  Cohen acknowledged that Legal Geek was different because it is not an event only focused on the importance of lawyers – instead, it recognizes that data analysts, entrepreneurs and other non-lawyers are just as central to the conversation.

Cohen said: “Regulated legal activities are shrinking – legal services are expanding.  It used to be about legal expertise but now it’s an integration of legal, technological and business expertise.  The legal industry is as wide open as it never was before.”

Deregulation is a hot topic in many countries these days, including the U.S.  Dr. Eva Bruch of AlterWork from Barcelona shared that Spain’s legal system has been deregulated for several years.  Bruch showed data about the Top 100 legal service providers in Spain – the top 1-3 were national law firms, but numbers 4-7 were the Big 4 accounting firms PwC Tax & Legal, Deloitte Legal, EY Abogados, and KPMG Abogados. 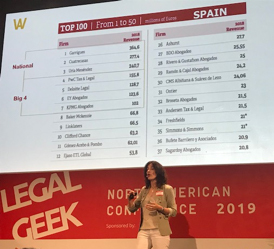 Specifically, Bruch mentioned KPMG Impulsa, which is doing insurance and accounting work for very low prices, which makes their services within reach for small companies.  She said KPMG achieves this by applying technology to their process.  Bruch noted: “If a process is manual, rules-based, repetitive and standardized, then it can be automated.”  Her recommendation for companies in the final stages of digital transformation is “don’t start with applying technology – create a culture of innovation.  Start with people, then process efficiency, then AI (artificial intelligence).”

If the best way for transformation is to start with the people, then at a law firm, many of those people are lawyers.  Tess Blair, a partner and practice group leader at Morgan Lewis, cited research from Dr. Larry Richard of LawyerBrain.  Richard found that lawyers have common characteristics such as skepticism, urgency and sensitivity to criticism which make it challenging to involve them in innovation projects.

As a lawyer herself, Blair suggested a jiu jitsu approach, leveraging the most annoying things about lawyers to advance innovation initiatives, not hinder them.  She explained: “Fight or flight is not a creative mindset.  Lawyers are agitated all the time, so create conditions where they are calm.  Inspire people in a place with windows, not in a basement.  Make it real and provide recognition.”  Blair specifically said not to offer lawyers monetary incentives or prizes for innovation tasks because money would activate a more competitive, less emotionally positive part of the brain.

In a private interview after her talk, Blair explained that Morgan Lewis works with design firm Ideo, which invented human-centered design as well as the Apple mouse.  She said at Morgan Lewis, they have a Shark Tank where people can pitch new ideas and Spark, which is their firm-wide initiative where people can form a team and get billable credit for their time.  Ideas can be submitted by anyone at the firm including lawyers and staff.

Lucy Dillon, Chief Knowledge Officer of Reed Smith, has taken the idea of incentives for innovation to a new level.  Dillon recalls that in 2017, her firm needed to make hours spent on innovation count for each lawyer.  Innovation hours were treated the same as billable client work time.  Dillon recalled: “We ran a pilot in 2017 and started with 5-7 projects.  We had a light touch approval process – 50 hours per person per year.  We got 7 projects through and reported back to the Board.”

Dillon said she then asked the Board for 2 projects per year per practice group, but the Board came back and said there were no limits, and her team could do as many innovations as they wanted.  Now, the firm has 40-50 projects going including innovations with clients and internal efficiency initiatives.  Projects are evaluated based on scalability, technology and revenue generation opportunity.  She said people don’t abuse the system - people realize they must deliver, or the time is written off.  She also said: “We’ve learned that failing is OK.”

Entertaining duo Susan Hackett of Legal Executive Leadership and Karl Chapman of EY Riverview Law aspired to a more elevated view of a lawyer’s role when completing legal work.  They asked what’s the higher use of a lawyer?  Hackett explained how lawyers early in their career are completed tasks that are “at the bottom of their license”.  But, as lawyers progress throughout their tenure, they sometimes are driven to hold onto more low-level work.  Hackett and Chapman encouraged lawyers to “rise to your higher use,” and allowing themselves to be freed from operational tasks, thereby revealing new, more challenging possibilities for experienced attorneys.

Removing friction from legal work was a theme weaving through many of the speaker’s talks.  Karl Kong from Axiom said in order to have an agile department, “we have to remove friction from the way we work.”  He proposed the power of matchmaking in legal as a solution for this, matching the right job to the right resource.

Bad design is another point of friction for both law firms and clients.  In one of the most humorous and engaging sessions of the day, Nicole Bradick, Founder and CEO of software development and design firm Theory & Principle Founder commented: “Law is full of bad design.”  But how do we move on from this – blow it up?  No, Bradick instead said that the way to best ease someone out of bad design is to present something better.  She stressed the importance of making technology easy to use.  “If something is frustrating, it won’t be used widely.  Lawyers still use Internet Explorer and that still affects development.”  To illustrate her points, Bradick showed some impressive examples of transformed websites and graphical user interfaces that her firm had accomplished for clients.

User experience is not just important for law firms, but for their clients as well.  According to Dan Reed, CEO of UnitedLex, the push of innovation is coming from Boards and C-Suites of the best companies in the world.  “Law has lost its immunity,” he said, and “going digital” means extreme client centricity.  Corporate clients are thinking in terms of “value capture” – gains built on performance and quality, lowering risk and cost.  Reed said that law firms need value capture to be relevant in today’s world.

Material covered during the many Legal Geek sessions was illuminating, thought-provoking and sometimes surprising.  In the spirit of Legal Geek’s emphasis of making friends rather than selling, it was a very friendly, social and fun atmosphere.  Attendees were all there to learn, to meet new people, and to revel in the opportunity to “talk shop” with colleagues from many disparate walks of life.

Overall, Legal Geek North America delivered on its promise and created a lasting impression on all in the room.  The collective education provided brought new perspectives on what innovation, agility, and transformation mean in the legal industry and showed how many vastly different paths could be taken to achieve these goals.  Brooklyn provided an exciting, hip and urban backdrop for Legal Geek North America.  The community is growing and is ready for more.

Christy Burke is President of Burke & Company (www.burke-company.com), a public relations, marketing and business consulting firm that serves innovative legal tech companies, law firms and law schools.  Email her at This email address is being protected from spambots. You need JavaScript enabled to view it. , follow her @ChristyBurkePR or connect with her on LinkedIn.
Tweet