I’ve been writing about lawyers using cloud and mobile technologies for nearly a decade now. While lawyers have adapted to mobile technology like a fish takes to water (all things considered), cloud computing has been a bit more of an uphill battle due to ethical concerns, among other things.

But over time, as ethics committees across the country have given cloud computing the green light, more and more lawyers have dipped their toes into the cloud, with many eventually moving all or most of their firm’s data to cloud-based servers.

First let’s take a look at the statistics regarding lawyers using mobile technology. According to the Report, the vast majority of lawyers now use laptops as part of their day-to-day practice, with 76% of lawyers reporting that they used laptops as their primary computer in 2015. Solo attorneys were the most likely to personally use laptops for law-related tasks at 82%, followed by lawyers from firms of 100-499, where 76% of lawyers reported using laptops.

The vast majority of lawyers now use smartphones as well, with 79% reporting that they personally used smartphones for law-related tasks in 2015 compared to 71% in 2011.

Likewise, lawyers are also incorporating tablets into their practices, with 42% using tablets in their practices in 2015. 78% prefer iPads, followed by Windows Surface at 12%, Samsung Galaxy at 11%, Amazon Kindle Fire at 5%), Google Nexus at 2%, and Asus Transformer at 1%.

So there’s no argument that lawyers have rapidly adapted to mobile technologies—especially considering that the first smartphone, the iPhone, was released less than a decade ago and the vast majority of lawyers now use smartphones in their practices. But what about cloud computing? Are lawyers adopting that technology into their firms as quickly as they have with mobile technology?

The chart below highlights the top cloud computing services used by lawyers for law-related purposes: 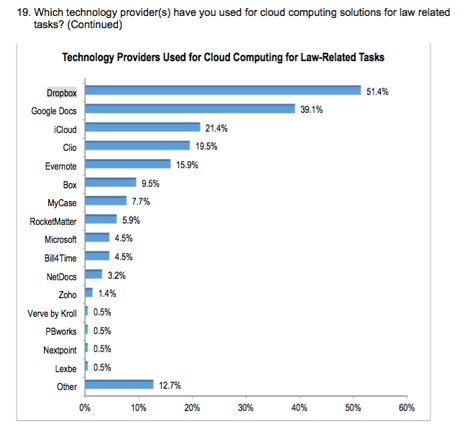 So why are lawyers using cloud computing? The bottom line is that it’s convenient and affordable compared to traditional premise-based systems, as you can see from the following chart that includes the top reasons lawyers report using cloud computing in their practices.

So, according to the Report, lawyers are increasingly using both mobile and cloud technologies in their practices, although some may not completely understand the extent to which they are doing so. Promising developments indeed, although the lack of comprehension is a concern—especially given that lawyers in many jurisdictions now have a continuing obligation to stay abreast of changes in technology.

Nicole Black is the Legal technology Evangelist at MyCase, a cloud-based law practice management platform. She is an attorney in Rochester, New York, and is a GigaOM Pro analyst. She is the author of the ABA book Cloud Computing for Lawyers, co-authors the ABA book Social Media for Lawyers: the Next Frontier, and co-authors Criminal Law in New York, a West-Thomson treatise. She speaks regularly at conferences regarding the intersection of law and technology and can be reached at This email address is being protected from spambots. You need JavaScript enabled to view it. .
Tweet