Last week saw retirement drinks for Janet Day, who is standing down as IT director of Berwin Leighton Paisner (BLP) after 18 years with the firm. Janet hands over to Mike Nolan on 1st January, but she assures us that she isn’t disappearing completely from the legal IT scene!

As befitted a reception for the undisputed leading lady of legal IT, BLP’s client suite was packed with Janet’s friends, including numerous IT directors from top City firms and beyond, suppliers, consultants and more – as well as many current and former clients and colleagues.

Managing partner Neville Eisenberg presented Janet with gifts from the firm, which included the painting from her office - Janet loved that painting and had asked if she could buy it!  So it was a perfect gift. It’s a bit embarrassing to admit that I cannot recall the painting, and I have had many coffees with Janet in her office. Clearly our conversations were always so compelling that I was not looking at the décor. 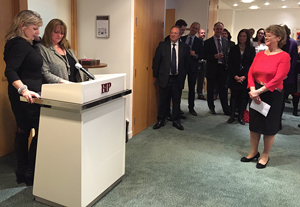 Neville’s tribute to Janet included the fact that she and her team have won every award going for legal IT! And two of her best legal IT friends – Jan Durant (Lewis Silkin) and Julie Berry (RPC) – gave a presentation, explaining as part of an outrageous little speech (that I had better not report in full) that they had another award for her. A few years ago, there were so many awards that Jan, Julie and Janet thought they would create their own – the Witchies Award! The Witchies included a Janet Day Award – because, of course, no awards would be complete without an award for Janet. Naturally, Janet won every year, except once, when it went to her husband Stuart!

Jan and Julie’s Janet Day Award was a beautiful, beribboned witch’s hat, which she wore to make a little thank you speech. Janet had apparently prepared a speech, but she wasn’t expecting the Witchie Hat, so she made a different one! She said that best thing about her job was learning ‘shed loads’! She got the expression from someone who told her at a job interview that he hoped to be in her job within five years. Clearly this didn’t happen, but she even learnt something from him. 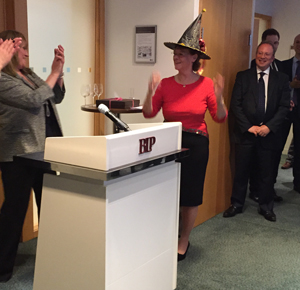 She told a couple of great stories from legal IT events involving late nights and vintage champagne and thanked everyone, especially Stuart, who makes her a cup of tea every morning. Normally, this would be considered a simple, sweet gesture. But as most of us who have regular dealings with her know, Janet starts work very early and she gets up at 4.45am! So for this among many other things, Stuart is a bit of a hero.

It was an excellent evening (brilliantly put together by BLP’s wonderful Jane Livesey), lovely to see Janet and Stuart and a privilege to be there.

One of Janet’s many successful initiatives is the Adelaide Group, a networking group for women in business. Its quarterly meetings include a short presentation and Q&A with an inspiring woman leader followed by a perfect ladies’ lunch with wine and canapés. It is good to know that Janet is continuing her involvement with this and some other projects in 2015. So it is au revoir, not adieu from Janet Day. But she won’t be getting up at 4.45am every morning any more – Stuart must be pleased about that!